The Urumea River Basin is an area greatly struck by flooding. This is the reason why the Basque Regional Government Agency for Environmental and Territorial Policy and the Basque Water Agency – URA, are implementing an action plan to reduce the floodability of the river and the problems caused by flooding in Donostia, Astigarraga and Hernani.

The plan involves replacement of bridges, channelling, adjustment of river meanders, etc. The goal is to «let the river breathe» and «allow the flood waters to flow freely with the fewest possible obstacles on their way in case of extraordinary flooding » in words of Ana Oregi, Minister of Environment of the Basque Government for the El Diario Vasco newspaper. The most severe floods were suffered in August 1983, January 2004, February 2009 and November 2011, as URA pointed out.

View of the Karabel Bridge in Hernani. / Lusa

The Urumea on the verge of overflowing the bridge. ARIZMENDI

The new bridge solves the problem of the excessive elevation of the water level during high water. The urban development on the right riverbank in the 70s, right in the middle of the floodplain at a higher elevation than that of Karabel, modified the fluvial dynamics and raised the water surface level already produced by the bridge since its construction, thus causing greater floods in the neighborhood. (according to Juan F. Manjarrés as published by El Diario Vasco).

The design of the new bridge was carried out by CFCSL and the engineering firm San Sebastián IKAUR SL. The installation of the steel structure over the Urumea River was executed last Sunday, July 15.

“The solution given to the new Karabel Bridge is that of a tied-arch bridge, with a lower deck and slanted arches, of a 51 m long span.” said Javier Muñoz-Rojas Fernández,  civil engineer at CFCSL.

“More than fifty workers supervised and carried out the transfer and installation of the new bridge in the Karabel district of Hernani. The Basque Water Agency, URA, was ready to begin the operations as early as 6 am, in a project that represents one of the most important actions within the Urumea Flood Defence Plan. 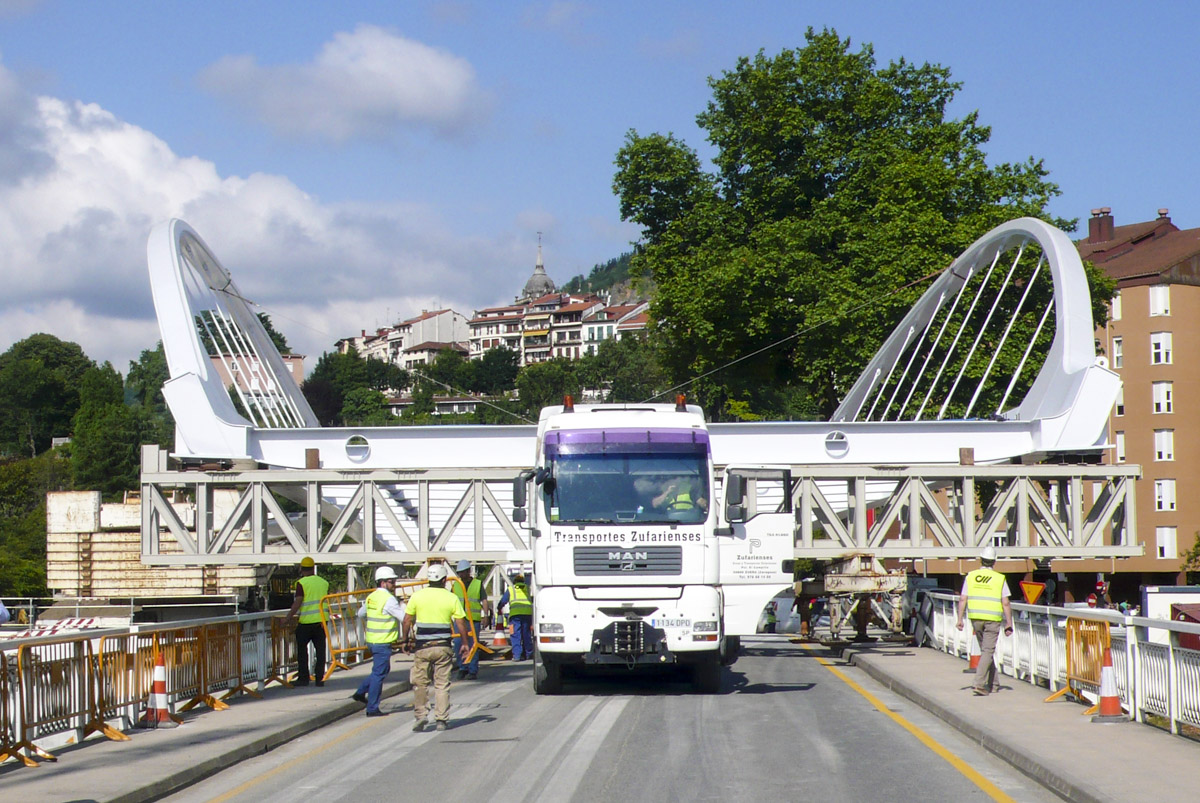 … the structure was transferred in order to bring it next to the old Karabel Bridge. The new bridge was first placed above the old, only to be gradually shifted to one side, where the foundations on the abutments of the new bridge were executed>> as explained by Aitziber Urquijo, the URA manager.

The most complex operation was precisely the transfer of the bridge from the parking lot to its final location.  <> the representative of the Basque Water Agency explained. 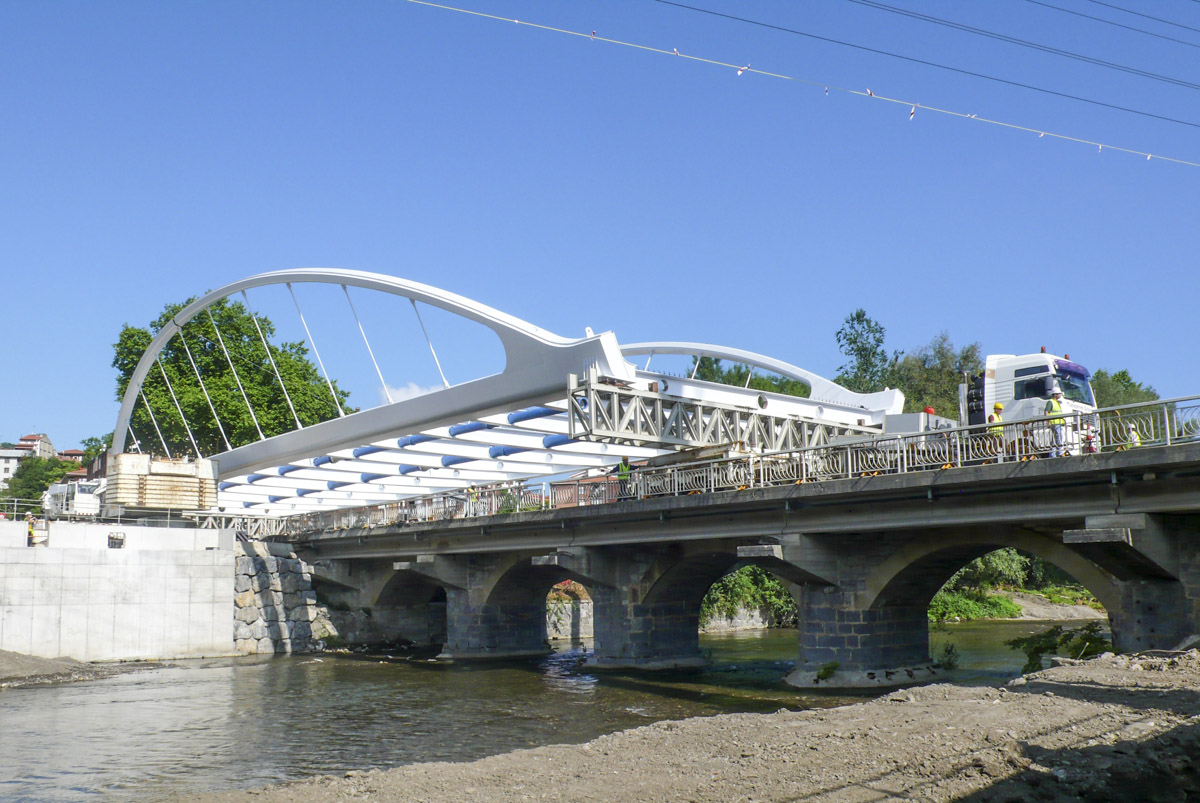 Around 11 am the new bridge was already hanging above the old one. The manoeuvres that followed, which included shifting the bridge and lowering it into its final position, were carried out seamlessly. (in words of María Cortés for El Diario Vasco) 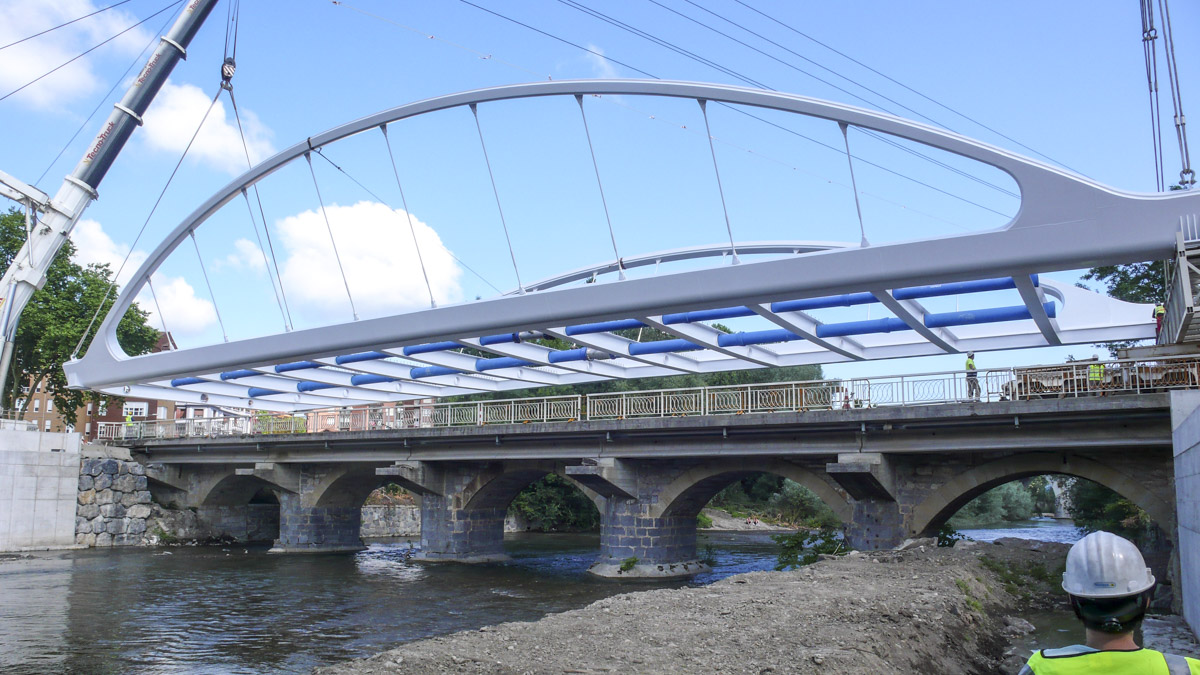 From this moment on, with the steel structure in place, the deck is to be built and paved.  The old bridge is to be demolished in September.