The bridge over the river Arno, CFCSL project, is located on the road that links the municipalities of Terranova Bracciolini, San Giovanni Valdarno and Montevarchi. Arezzo. Italy.
Since the beginning of the project, object of an international competition, it has been present to design a singular bridge adapted to the visible environment both from the Sun motorway and from a large part of the municipalities mentioned.

As in any project work, the finally solution chosen responds to a process of successive approximations in which the different factors that intervene have been taken into account: structural, constructive, environmental and economic.

This distribution of spans has been conditioned by several factors. On the one hand, the channel of the Arno in the area of ​​the bridge is little defined, not needing to save the full width between the avenues. For this reason one of the batteries (P-5 Battery) in the channel on a fairly stable and defined island has been arranged. The P-4 and P-6 piles delimit the channel of river avenues. The crossing of the Autopista del Sol is made with a span of 48.0 m of light in order not to hinder its service during construction and allow its future expansion.

On the left bank, the span have lights of 30.0 m, except for the extreme span that has 25.0 m to achieve adequate structural compensation. With these spans a diaphanous and transparent zone is obtained both from the hydraulic and landscaping point of view, achieving a maximum height of the E-1 footboard of 5.80 m.

On the right margin after the motorway junction the board with the spans of 30 and 25.0 m is extended until reaching a reduced height of 5.00 m so that the access terrain has a limited height, the geotechnical conditions of the area.

The main means are formed by the upper means in the inclined planes joined in the key area and two intermediate diaphragms. These arches are linked to the board by means of braces and lower ribs located every 5 m.

The effect of the two arches inclined one in the prolongation of the other side of the driver as a pedestrian, an important reference element in its entrance to the city of Montevarchi. This is the arrangement of the structure, there is no production of another part, no visual or landscape interruption in the user due to the great separation of the structure, on the one hand and the braces, on the other. 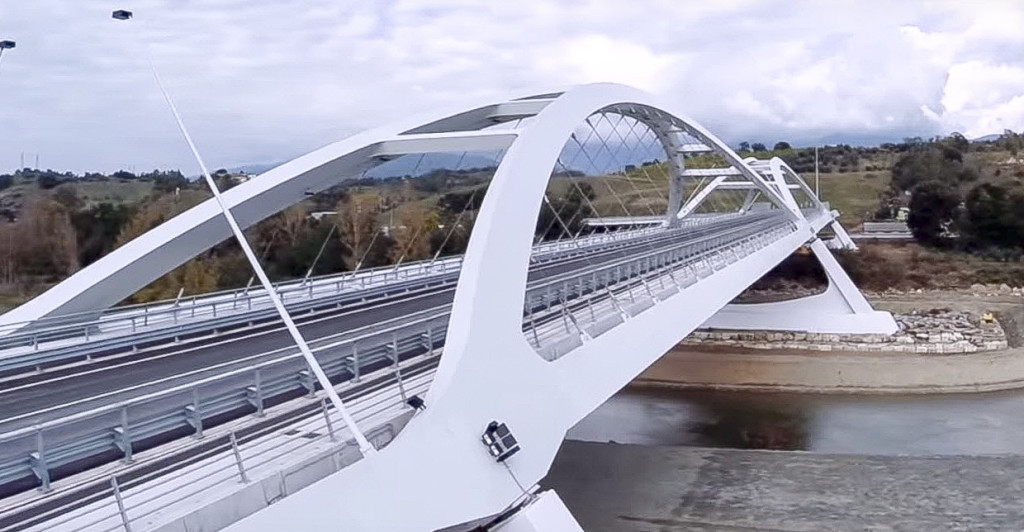 The cross section is formed by two pedestrian areas of 3.0 m width, for pedestrian and cyclist use, two shoulders of 1.50 m and two roads of 3.75 m.

The board has three types of sections, adapted to the ranges of lights and typologies, in both cases in mixed concrete-steel section. In the arc zone (and the 2 adjacent bays) are formed by transverse ribs every 5.0 m and two side caissons of 1.90 m of ridge and 0.80 m of width with variable thicknesses that act as lower tie rods of the arches.

The concrete platform has a width of 18.00 m although the requirements of connection with the arches makes a total width of 22.60 m necessary.

In the two bays adjacent to the arches with respective lights of 30 and 48 m, the board has a section composed of the lateral drawers with a variable edge and transverse beams as in the openings of the arches and, simultaneously a drawer as in the openings of access. In this way a formal transition between the two types of board is achieved and at the same time the resistant capacity of the span over the motorway increases, with a light range and with a strict clearance.

The section of the board in the rest of the access spans is made with a tricellular box section with 2 vertical souls and 2 inclined souls with a total edge of 1.40 m.

In both sections the reinforced concrete slab has a total thickness of 0.25 m formed by a prefabricated pre-slab of 0.06 m and a concrete slab in situ of 0.19 m.

The stacks on which the board rests with the section with transverse ribs have trapezoidal geometry in extension with the planes of the arches with variable dimensions created by three arcs of circumference in the lower brace. The foundation is made by means of piles of 1.20 in variable number.

The piles on which the board supports the drawer section are formed by a diaphragm with a constant longitudinal dimension equal to 1.20 m and a variable transverse dimension from 4.0 m in the lower part to 6.5 m in the upper part in a curved transition with a radius of 18.85 m. These piles are built on 5 piles of 1.20 m in diameter. The pile caps are squares of 7.30 m on the side and 2.50 m on the edge.

The support devices will be neoprene-Teflon in box and neoprene-strapped with a variable load capacity from 300 to 1900 Mp.

The abutments are formed by a front wall of 1.20 m thick, based on piles of 1.20 m in diameter and 2 fins of 5.80 m in length in the case of footboard E-1 and lateral walls that may be cemented with footings in the case of stirrup E-2.