Bridge over the river Nervión on the Bilbao Donostia line. Vizcaya. Spain. 2012. 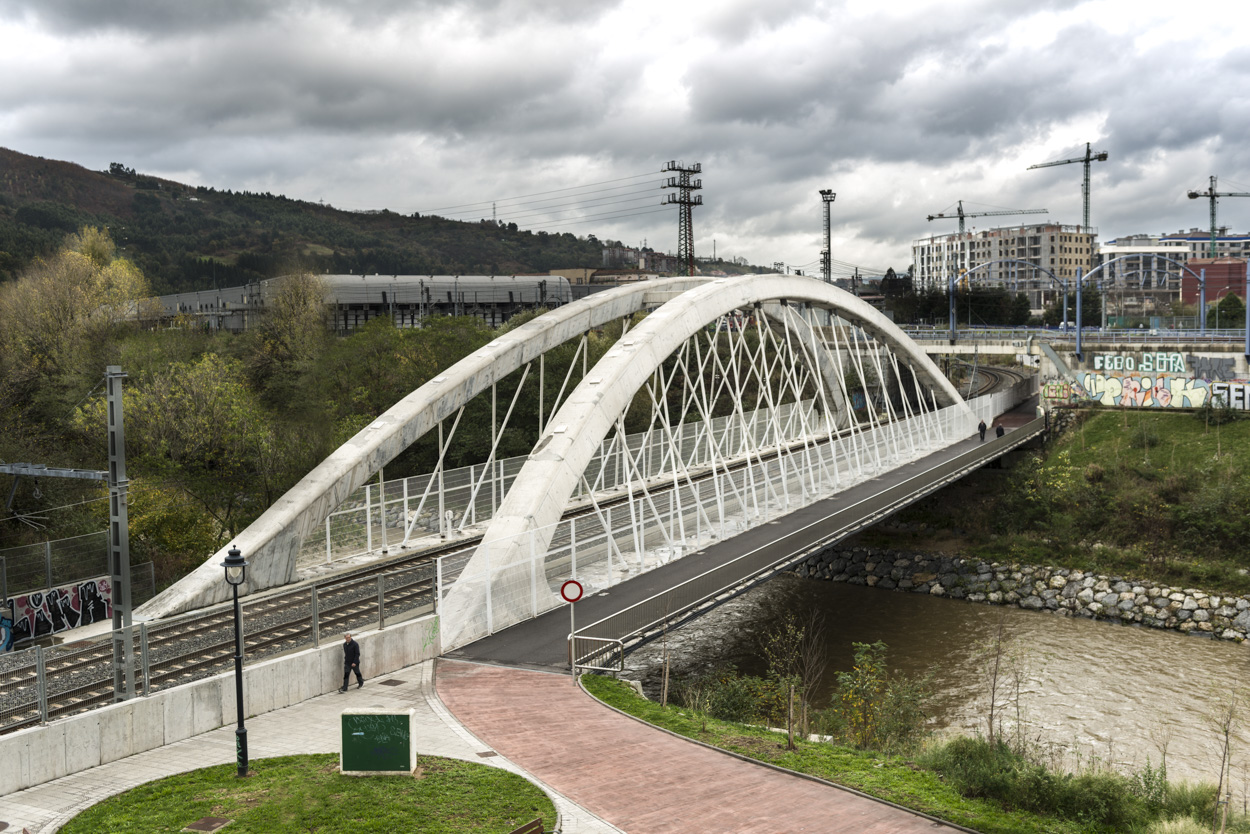 The Bilbao-San Sebastián narrow gauge railway passed over the river Nervión close to the Etxebarri station by means of a bridge of three spans with two piers in the river whose foundations had been increased at different stages and which considerable reduced the waterflow in the riverbed. Furthermore, the deck, formed of simply supported re-enforced concrete beams, was in poor condition. For all these reasons the decision was taken to replace the bridge, with the aim of removing the piers from the riverbed. The solution chosen was a concrete bowstring arch bridge of 80m span.

A general outline of the bridge

The new bridge over the Nervión river has a span of 80m, due to the need to cross the riverbed without introducing piers due to the canalizations introduced for this zone of the river by the Territorial Water Services of the Basque Government.  The bridge is to be found at the exit of the  Etxebarri station and its height over the riverbed is fixed by the position of the railtracks.  This height is low for a span of 80m , which required the building of a single span with above structure bridge, because  a simply supported beam would have an excessive depth which would considerably reduce the flow capacity of the river. 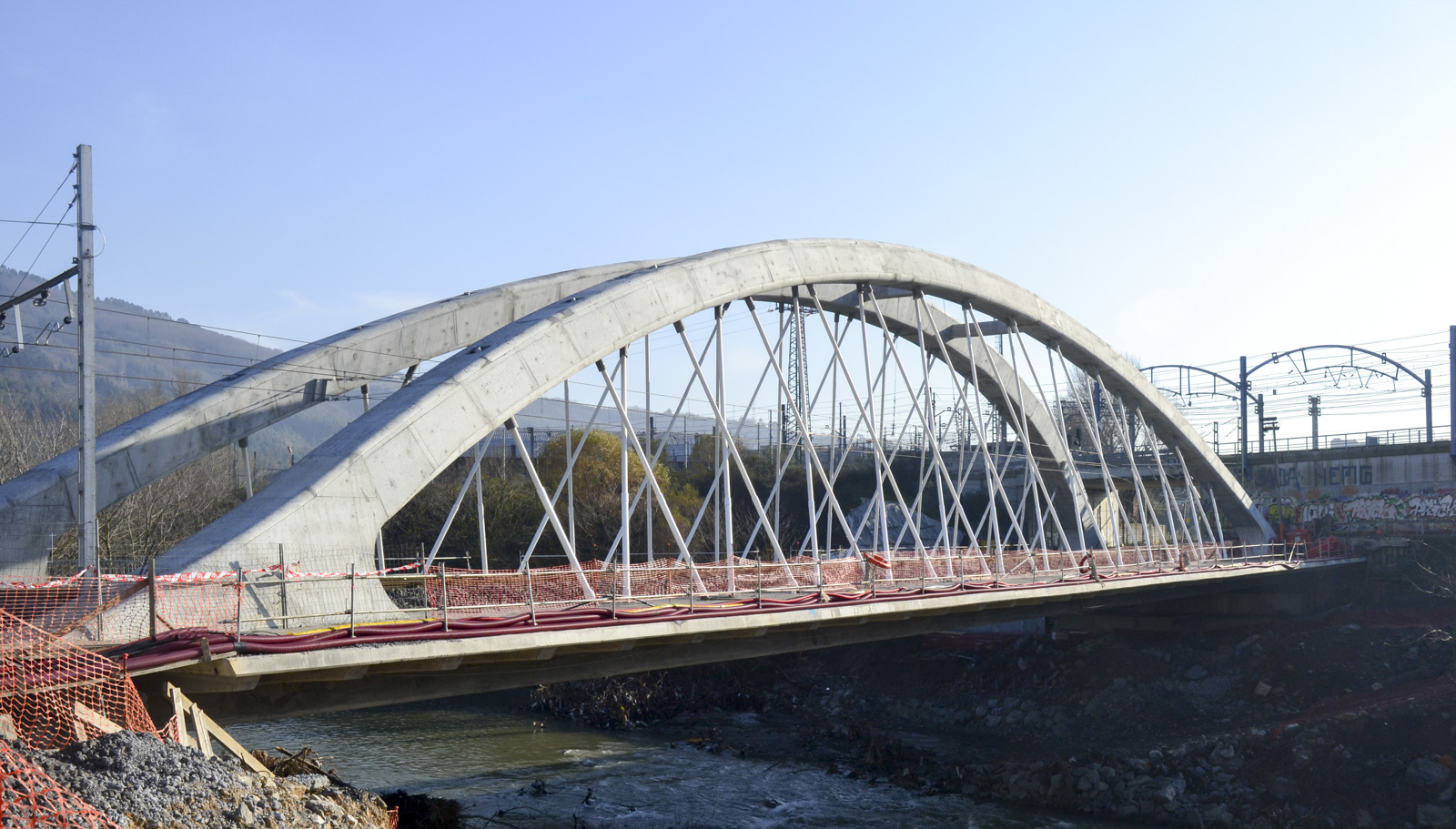 The solution which appeared most appropriate was a bowstring arch bridge in which the deck serves as a tie and with it the horizontal forces of the arch are avoided in its ends. Another advantage of this solution is that it reaches the river banks at its minimum depth and it is raised in the centre of the river, so that it causes minimal impact on the environment and countryside at its ends and the highest point of the structure is over the riverbed.  This is important in a semi-urban area as the river zone is now but which will probably become fully urban within a short time.

The material used for the bridge was concrete as was stipulated by the owner. In this case, as well as the advantage of the durability of this material, the increased cost of the construction of a concrete bridge against steel bridge, due to its greater weight, is offset by the lower cost of the material. 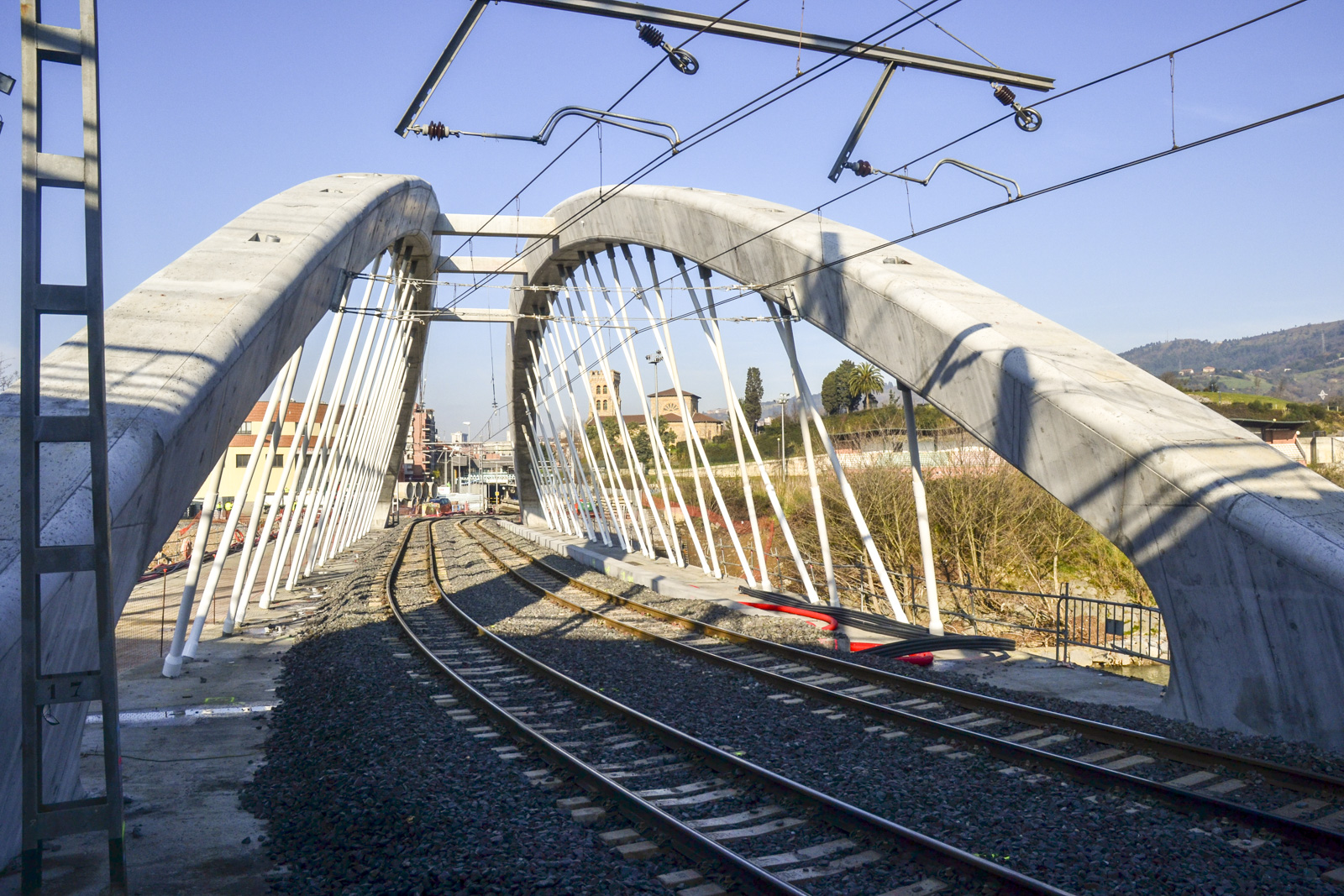 General outline of the construction of the bridge

If in the making of any bridge it is fundamental to know how it will be built to know how it will be, in this case it was of the first priority because it was a case of substituting a functioning bridge with as little disruption to the train traffic using it as possible. For this reason, in this process there were two basic steps. 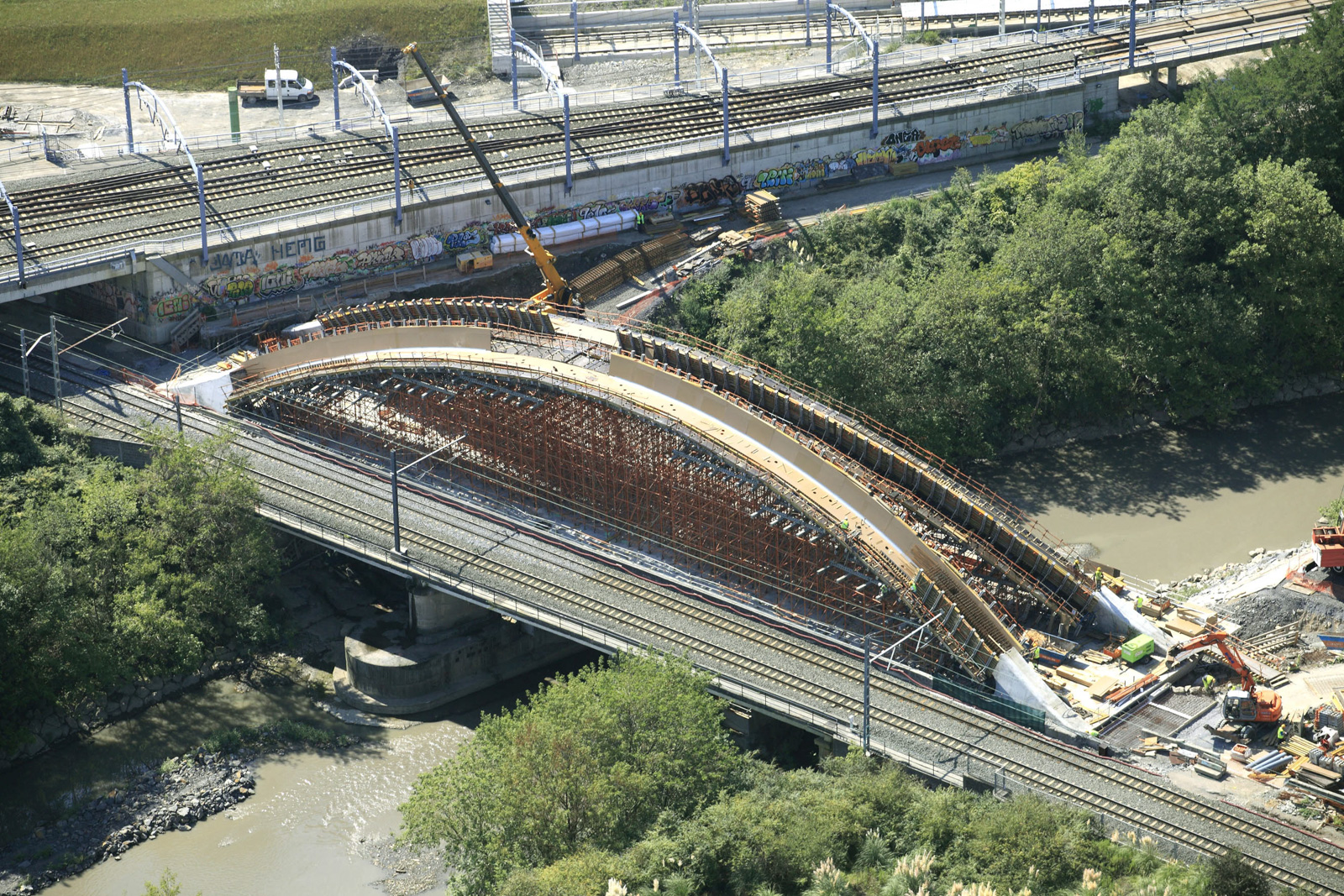 If the two actions are carried out in sequence, as at first seemed most logical, the time for which train traffic would be suspended would be more than a year, which was unacceptable to the rail service. This period must be reduced to days, and to achieve this it is necessary that during the demolition of the existing bridge the lines can be diverted over a parallel bridge, so a new bridge would be constructed in a parallel position to the present bridge. Once constructed the traffic would pass over it, the demolition of the original bridge could go ahead, and then the construction of the definitive abutments of the new bridge, which must be aligned with the provisional abutments. 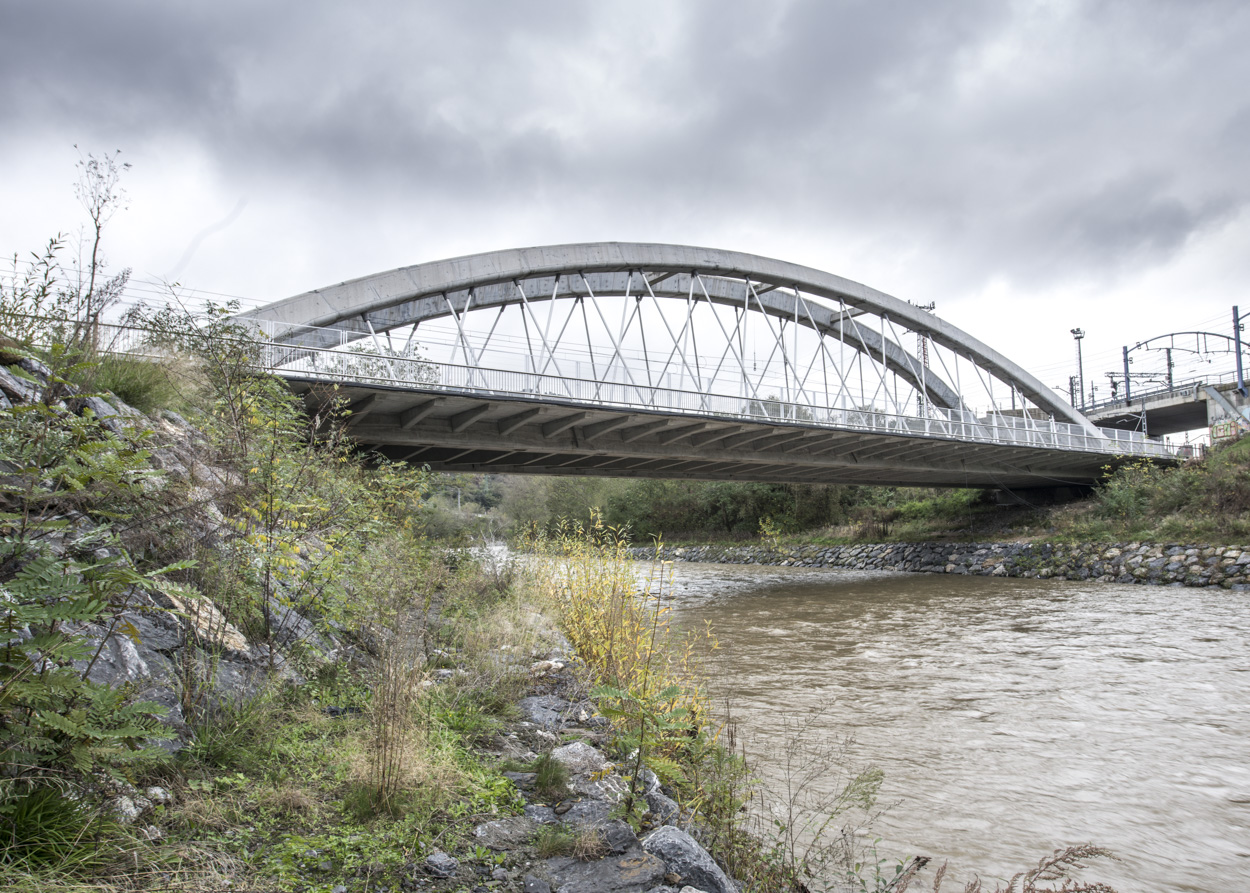 The sliding operation and the substitution of tracks could be carried out in, at most, five days.In this way the interruption to the railtracks would affect the rail service for a very short time.